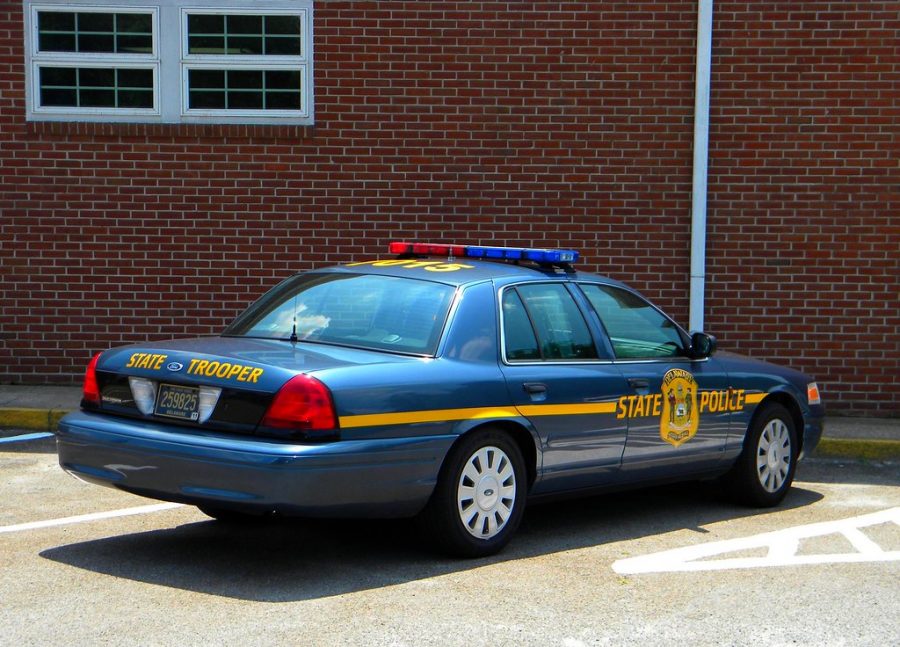 A state trooper car, like other police cars, shows its presence at schools around the country.

This past summer, the Black Lives Matter movement brought attention to the deep-rooted police brutality and racially motivated violence towards people of color. As these issues were brought to the public’s attention, the problems with having police officers in schools became all the more clear.

School resource officers, also known as SRO’s, are law enforcement officers employed at local police departments or agencies who are assigned to work at and collaborate with schools. SRO’s receive 40 hours of specialized training in school policing before working at schools. SRO’s are still police officers, and therefore they carry the same equipment they are issued, which includes guns.

Ideally, SRO’s are stationed at schools to minimize property damage to the school, prevent student injuries and death, reduce the need for schools to call 911, reduce the likelihood of students having criminal records, increase the likelihood that students with mental health issues can receive the help they need and provide and increased feeling of safety among students and staff. “The goals of well-founded SRO programs include providing safe learning environments in our nation’s schools, providing valuable resources to school staff members, fostering positive relationships with youth, developing strategies to resolve problems affecting youth and protecting all students, so that they can reach their fullest potentials.” The National Organization of School Resource Officers said.

Despite the intended goal of increasing students’ safety, the presence of armed police in schools has had an adverse effect. Students, especially students of color and students with disabilities, consider police officers threatening. “The resolution brings up the narrative of the ‘school-to-prison pipeline,’ as a growing sentiment that African-American and Latino students and students with disabilities are often singled out for discipline that sometimes leads to arrests​,”​ Legislative Analyst’s Susan Farag and Craig Howard said in the Maryland Safe to Learn Act of 2018.

More problems are found surrounding SRO’s presence in schools. Incidents of unwarranted violence against students have convinced ​many​ school systems throughout the United States to abolish the SRO program. “School districts in Minneapolis, Seattle and Portland, Ore., have all promised to remove officers, with the Seattle superintendent saying the presence of armed police officers ‘prohibits many students and staff from feeling fully safe​,’”​ according to the New York Times.

Supporters of the SRO program argue that having officers in schools benefit students in dangerous situations, such as school shootings. However, there is little evidence that shows SRO’s protecting students in these situations.

In the case of the Parkland school shooting in 2018, the school’s SRO, Deputy Scot Peterson, remained outside of the school in a safe area instead of entering the school to protect students. In fact, SRO’s in schools are not required by law to protect students in dangerous circumstances, and more often than not are not effective in protecting students. An internal probe by the Broward County Sheriff’s Office found that Peterson, who was assigned to the high school as a school resource officer, “did absolutely nothing to mitigate” the shooting, according to a statement released by the agency​,”​ Broward County Sheriff’s Office said according to ABC News.