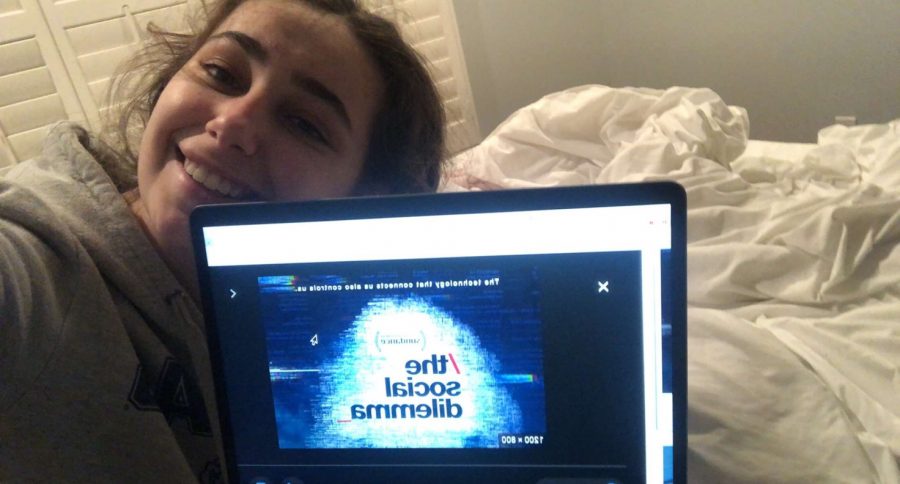 Sophomore Carli Katz gets comfy in bed to watch The Social Dilemma.

As my friends and I have gotten older, we’ve found that we enjoy watching documentaries. Since the beginning of quarantine, I have watched at least one documentary a month. In the past couple of years, more and more documentaries have been released that are made for a teen audience. Here are five documentaries I have found to be the most entertaining for teens like me.

5. The Real Story of Paris Hilton
Paris Hilton is a public figure many of us grew up watching. She is known as being a sterotypical “dumb blonde” who spends her time partying. While her glitz and glam life seemed perfect, Hilton experienced awful events as a child that shaped the FAKE persona she created of herself. Yes that’s right, the Paris Hilton we all know and love is just an act. One of the worst childhood events this documentary brings to life is the time she spent at Provo Canyon School, an abusive boarding school in Provo, Utah, for troubled kids. This documentary tells the untold story of the real Paris Hilton, not the blonde bimbo we all think she is. Although a bit slow, this was a good film because it proved that just because someone is rich and famous, doesn’t mean that their life is by any means easy.
Overall rating: 6.5/10
Where to watch: Youtube

4. The Disappearance of Madeleine McCann
This eight-episode docu-series is for all of the true-crime fans out there. Madeleine McCann is a three-year-old British girl who went on a trip to a resort in Portugal with her family and her family friends. One night, all of the parents decided to go to dinner at a restaurant less than a two-minute walk away from the apartment they were staying at. Every 20 minutes, one of the parents would go back to check on the kids. When it was McCann’s mom’s turn, she went back to the apartment to find that McCann was not there. The whole resort, local police and Portugal’s version of the FBI went looking for her. They searched throughout the night and for days after but no one could find her, thus prompting the question: how did a three-year-old magically disappear in a foreign country and is nowhere to be found? Although the case is still unsolved, and McCann still not found, this documentary is worth the watch because of the detail. After the first episode, I did not think that there was much more left to be said. I was proven wrong episode after episode when more and more facts were still being told that left me wanting more. Senior Jillian Pohoryles watched the series with her cousins during quarantine. “I like watching criminal minds and Law & Order: Special Victims Unit especially because the cases are solved pretty much every time and it doesn’t leave room for too much overthinking. The Madeleine McCann documentary, however, is still unsolved and I find it very unsettling that McCann has been missing from her family and there is little information on her whereabouts,” Pohoryles said.
Overall rating: 7/10
Where to watch: Netflix

3. Fyre: The Greatest Party That Never Happened
Advertised as being set on Pablo Escobar’s private island, the April 2017 Fyre Festival was supposed to be the music festival of the century. Approximately 5,000 people spent over $1,000 for different living packages and expected to see artists like Migos, Tyga and Blink-182. As the date approached, attendees began flying in to see…nothing prepared. No living quarters. No stage. No artists or celebrities. Nothing. Although it seemed that way to guests, the Fyre Festival was not meant to be a scam. With Bill McFarland, the creator of the Fyre Festival, now faced with a series of legal battles, this documentary sheds light on the details behind why the Fyre Festival was not ready in time. This was an excellent documentary because it demonstrated that just because you have money, doesn’t mean that things will magically work out for you. It was also interesting to see the process behind how music festivals, an event that many teens have or wish to go to, are made.
Overall rating: 8/10
Where to watch: Netflix, a similar documentary (Fyre Fraud) is also available on Hulu

2. Explained
Created by the news site Vox, this series puts the spotlight on a wide variety of typical and atypical topics that impact people’s life. Every 15-20 minute episode is focused on a different topic. My favorite episode between the two seasons is the episode titled “The Future of Meat.” This episode goes into vivid detail on how meat is produced, the history of meat in our diets and the health pros and cons of eating meat. The Explained series also produced a variety of mini-series in which all of the episodes relate to that overall topic. The mini-series’ available are: The Mind, Explained; Whose Votes Count, Explained; Sex, Explained and Coronavirus, Explained. My favorite series is The Mind, Explained, particularly the dream episode. The Explained series is beyond amazing because it is informative and entertaining. Professionals give their input, establishing credibility. Many colorful graphics, statistics and cartoons are used throughout each episode to keep you engaged. I would recommend watching any episode of this show late at night when you can’t think of anything else to watch. Trust me, you will find yourself watching more than one episode.
Overall rating: 10/10
Where to watch: Netflix

1. The Social Dilemma
What can arguably be called the documentary of the year, The Social Dilemma takes an in-depth look at the effects social media/tech conglomerates such as Google, Instagram, Twitter and Facebook have on the general public. Throughout the film, text experts bring valuable insight on the dangers of excessive social media usage. One of the more interesting parts about this documentary is that even though it is an average documentary with expected expert interviews and graphics, there is also a story going on at the same time. This story is sort of like an actual, fictional movie featuring well-known actor Skyler Gisondo. Gisondo’s character, Ben, portrays the average teen’s day-to-day life using social media. But while we see scenes of Ben, the narrator is in the background telling the audience about the dangers of social media use and the intentional tricks these conglomerates are using to keep you engaged. We see Ben engaging in all of these behaviors, which makes you (the audience) realize that you exhibit the exact same behaviors, proving that these conglomerates have you in the palm of their hands. This documentary had such a drastic effect on me that when I watched it on a random evening last month, I did not want to touch my phone for the rest of the night. When I found myself right back on Snapchat the next morning, I felt ashamed for acting the exact way that these conglomerates wanted me to. That weekend, I would say that I used social media a lot less, but over time, this feeling of embarrassment faded and I unfortunately went right back to my old bad habits. Sophomore Carli Katz watched The Social Dilemma and explains the effects it had on her. “I thought the movie was really interesting and made me think more about my social media usage. The documentary made me want to use social media less, even though that is something that I’m basically addicted to,” Katz said.
Overall rating: 10000000/10
Where to watch: Netflix