JV Football: Playing from behind 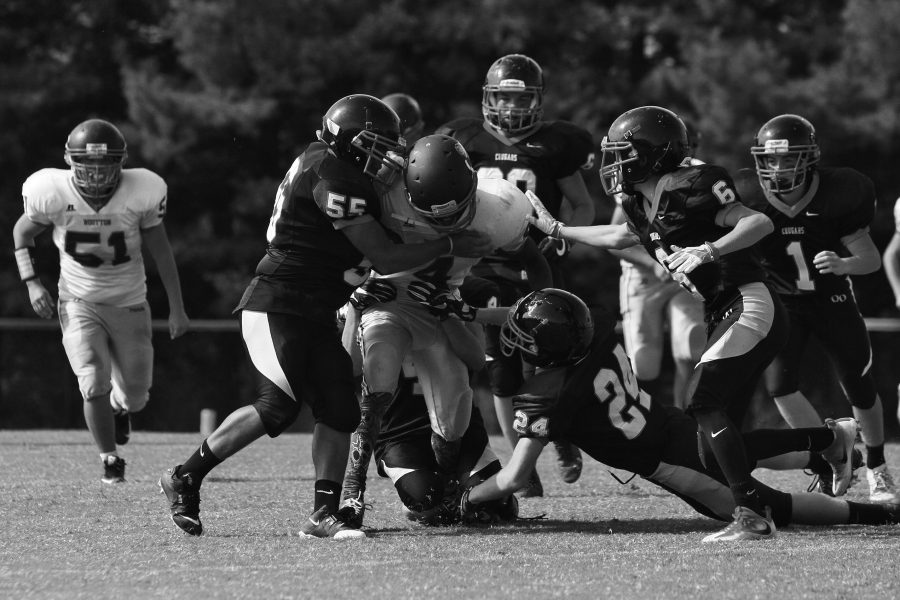 After a brutal 0-2 start to their season, the junior varsity team continued their season with matchups against two more tough opponents in rivals Quince Orchard and Richard Montgomery.
On Sept. 17, the junior varsity team travelled to Quince Orchard seeking their first win. QO struck first with 12 points, but the Patriots answered with a stunning 97-yard touchdown pass from freshman quarterback Larry Feldman to sophomore receiver Jonathan London. The ensuing two-point conversion by sophomore running back Ralin Lewis cut the deficit to 12-8 and gave the Patriots confidence going into halftime.
The second half was another story. Quince Orchard pounced for 38 unanswered points in the second half, exposing the depth of the undermanned Patriot squad. The 50-8 defeat handed the JV its third loss of the season.
The team took some solace in the defeat, finding positives from an impressive first-half performance. “We are showing improvement,” sophomore Alex Cohen said. “Our closest game was to the best team and it was in the third week, so that shows some improvement.”
The rocky first three games had the boys on alert. “It’s been a big wake-up call,” London said about the start. “All of the new kids to football are waking up a little bit.”
If the Patriots’ third game was a step forward, their fourth game, at home against the Richard Montgomery Rockets, was a leap in the right direction. The Patriots fell behind early and trailed 19-6 at halftime and the Rockets tacked on two more touchdowns to extend their lead to 32-6.
In their previous games, the Patriots’ lack of depth finished them in the second half of their games, but against RM with a four-touchdown deficit, the boys didn’t give in. Lewis carried the Patriots’ offense on his shoulders, carrying 15 times for 120 yards in the second half, and freshman running back Damonte Lucas punched in two goal-line touchdowns. Though the Patriots suffered a 39-19 defeat, they had more touchdowns in the game (three) than they had all season and kept an opponent under 40 points for the first time this season.