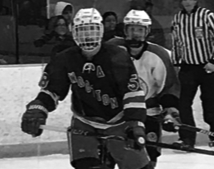 The hockey team has clinched the 10 seed out of 16 in the upcoming state playoffs. While they ended up finishing second in the division, they are the 10 seed in the playoffs due to a random selection. On the playoff system, “It’s a little bit funky,” but “ultimately the four best teams will end up in the semifinals and the two best in the championship,” coach Alexander Parker said.

On Feb. 2 the team took on Churchill. Having lost 6-0 to them earlier in the season the team was looking to prove that they are not the same team they were. Junior John Billingsley did not play in the first game, but he played in this game. While he didn’t have any goals or assists he did generate lots of scoring chances.

Junior Hunter Band started out the scoring with an unassisted snipe on the power play to make it 1-0. Following that, sophomore goalie Colin Brick got hurt on a play and was on the ground in pain while Churchill scored to make it 1-1. Freshman Riley Jordan came in the game in relief of Brick. Wootton struck back quickly after freshman Robbie Neill netted his fourth goal of the season off of assists from seniors Ethan Heiberger and Zack Lechner to end the second period 2-1. Churchill came out hot in the third period scoring three quick goals to make it 4-2, and there were no more goals after that. “Although we lost the lead we proved that we can play with them. I feel like if we see them in states we’ll have a good chance to take them down for the first time in my four years here,” Lechner said.

If the two teams meet in the playoffs, then the only time they could meet is in the state championship game due to the way in which the bracket worked out.

The week before, they played Richard Montgomery and handily beat them 8-2. During the matchup earlier in the season RM had a come from behind 4-3 victory. Multiple players were hurt that game, so the team felt much more confident this time around.

Freshman Daniel Tomashevsky and Billingsley each netted first period goals to make it 2-0 but RM also found the back of the net to make it 2-1. In the second period junior Jake Smith and sophomore Scotty Collinson each scored to make it 4-1, but RM scored to start the third to make it 4-2. Wootton scored four goals through the rest of the third period to end it 8-2.

On Jan. 19 they played BCC. The game ended in a 4-4 tie, and it was the last game without Billingsley who has been a major offensive force this season. After BCC struck first, sophomore Zeming Chen scored a breakaway goal assisted by Band. After trading goals to start the second period again Band scored to make it 3-2. After BCC scored twice to make it 4-3, Band netted another for his second goal and third point on the night. The second period ended 4-4 and there were no goals in the third.

On Jan. 12 they played Blair. Billingsley scored the first three goals of the game to make it 3-0. Band and Lechner each scored, followed by two more Billingsley goals to make it 7-0. Smith, Lechner and Heiberger started out the third period with three goals to make it 10-0. From there Blair scored then Lechner then Blair then Heiberger then Blair. The game was a 12-3 win in a solid effort from freshman Riley Jordan.

The first round playoff matchup was against Northern on Feb. 15, too late to be covered in this issue.