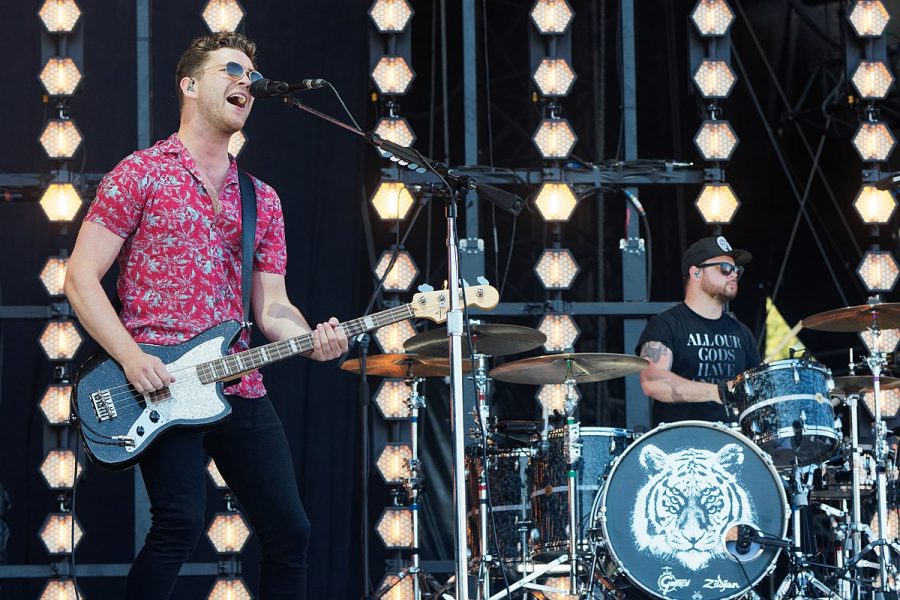 The two-piece band Royal Blood have always embraced their untraditional and unique rock sound. With their use of merely an electric bass and drums they create a dynamic and explosive sound. Their newest album, ‘Typhoons’, manages to incorporate new elements of dance music into their refined rock riffs.

The first single, ‘Trouble’s Coming’, introduced the tight, guitar-resemblant bass tones to a disco-influence groove, and a palette of mysterious and spacey electronic instrumentation. These come together to create a dark, dead-of-night dance-rock masterpiece.

The title track, ‘Typhoons’, follows up on their new dance-rock sound with backing chorus vocals, and a drum beat that is sure to get you moving. Although the synthesizers are utilized more subtly, the irresistible groove that the band works with adds to the track’s disco feel. What’s more, the lyrics about bad thoughts that rage on convey a strong sense of the fear that surrounds singer and bass player Mike Kerr.

On the other end of the spectrum, ‘Limbo’ revolves around the various pulsating synthesizer sounds. The bass is relegated to a more additive role, as opposed to a foundational piece of the song’s structure.

The duo returns to their rock-driven roots on ‘Boilermaker’. This track’s more traditional and sharper bass tones make for an outlier within the tracklist of the album. Nonetheless, it remains a great song that fuels the listener’s adrenaline. The shadowy vocals toward the end of the track add a nice contrast to the overall harshness of this cut.

Directly after Boilermaker, ‘Mad Visions’ provides a change of pace from the intensity of the former, with choral backing vocals. Once again, drummer Ben Thatcher’s knack for grooving drum beats comes through, with Kerr singing about letting go of delusions that continually haunt Kerr. This next cut, ‘Hold On’, is a continuation of Mad Visions, however it switches thematically, as it reflects on embracing even the most difficult challenges and not taking the easy way out.

On a similar note, ‘Who Needs Friends’ builds up as the song progresses, until it reaches a crescendo with choral vocals interplaying with Kerr’s vocals, as well as catchy chorus lyrics. ‘Oblivion’ takes a similar approach, with Kerr’s vocals being layered to create a multi-dimensional feel.

The closing track, ‘All We Have is Now’, features a drastically different feel from the rest of the songs, with saturated vocals over piano chords with a slight glitch effect. It works as a conclusion to Typhoons, as Kerr expresses his desire to live in the moment. However, it seems to feel like filler within the tracklist.

Overall, Royal Blood makes an emphatic statement with Typhoons, confronting all of these pent up fears, concerns and anxieties that achieve a relatable, yet awe-inspiring takeaway. It is a fantastic listening experience, which I would rank highly among 2021 releases so far.